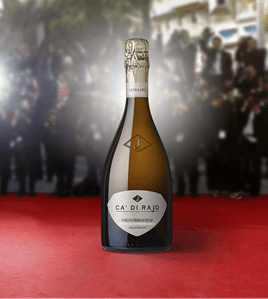 The Italian winery Ca’ di Rajo is one of the gifting sponsors of the 2019 International Emmy Awards. The company, run by the Cecchetto family, will congratulate the nominees of the 47th edition with a gift of a bottle of Valdobbiadene Prosecco Superiore Docg Extra Dry.

Each year, the leading television producers from around the world showcase their programming and compete to be recognized at the prestigious International Emmy® Awards Gala in New York City. Over one thousand international broadcasting, production and distribution executives convene to celebrate the best in global television. For the 2019 International Emmy® Awards there are 44 Nominees across 11 categories and 21 countries. Winners will be announced at a black-tie ceremony on November 25, 2019 at the Hilton New York Hotel.

Ca’ di Rajo’s modern interpretation of the Conegliano Valdobbiadene Prosecco Superiore give to this sparkling wine  an intense and elegant aroma of Acacia flowers with particular notes of apples, lemons and grapefruits; Good structure and soft fruity notes are its main characteristics. It is pleasant and harmonious on the palate thanks to its balance.

This Prosecco Superiore Docg is almost always made produced with the Italian method with the aim of obtaining the best expression of the aromas of the grapes. The fine perlage ensures a persistence of flavour and a clean palate. Averagely between 6 and 8°C, it goes very well with simple or elaborate appetizers of fish or vegetables, seafood or baked fish dishes.

Ca’ di Rajo expresses its love for the territory and for the beautiful nature. Situated in the Northern Italy, near Venice and Treviso, this winery identifies itself with the development and production of indigenous varieties of the Province of Treviso, such as Prosecco and Raboso.

Ca’ di Rajo produces its wine with respect to the environment and to the long-standing tradition of the Italian viticulture.

What Are We Talking About?